I was very thankful to receive your letter of Jan 15 on calling at the PO this morning and to find that you and all our dear ones were well. I left Launceston on Saturday afternoon the 21st and three of the Lord's little company of five. These came down to the boat to say goodbye – my heart was much drawn out to them during my stay and it appears to have been a cheer to them to have a visit from a brother in England. Dr Burton knows one of them very well and had mentioned in a letter a few weeks ago that I was likely to call. We had a fine passage across to Melbourne arriving here about 10 yesterday Lord's day morning. On reaching the Coffee Palace where I stayed on my previous visit a letter from Mr Baston a leading brother awaited me entreating that I should see him and Mr Stewart before taking as he called it an antagonistic position against them – he evidently had not heard of my letter to the meeting at Cape Town, but in other ways seemed well acquainted with my movements and recent difficulties. Soon after I reached the hotel a brother called and I accompanied him to his house at Middle Brighton some 8 miles from Melbourne – he is a wealthy gentleman living in a fine place and his wife is a fine lady and they made me feel thoroughly comfortable and at home. Both have left the meeting since their acceptance of Mr Raven's new direction – after dinner two other brethren called and we spent the afternoon together happily and after tea all went to Prahran a few miles away to another brother's house one room of which was filled with a company of brethren who had come to meet me I was glad to find many that I had happy remembrances of on my first visit, especially one brother called Evans formerly of Sydney who since that time has been visiting many of the South Sea Islands and is a true man of God. Well we had a nice time together and I trust there was something for the Lord's heart too. Many have withdrawn from the meeting and none appear to have been happy with Mr Stewart's ministry and it is said that he has been carrying things with a high hand. I have definitely refused to meet him under any circumstances. At Christchurch where Captain Bagshaw is living the whole except 16 or 18 have rejected Ravenism.

It seems quite natural to be in Melbourne again – it is a fine city indeed – such magnificent wide streets and lofty buildings and a very perfect system of cable cars running at frequent intervals. 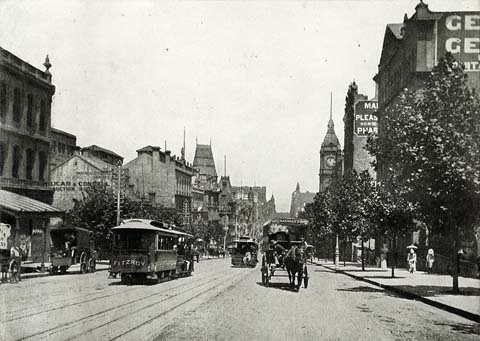 I hope I may be able to do as well in the business as on my last visit, but I purpose going to Adelaide to make a start as my fresh samples are there and several weeks' letters. I am thinking too of going around to Western Australia but this will depend upon the encouragement I meet with in Adelaide. One customer at Hobart gave me a letter of introduction to a good firm in Launceston and I was much cheered to get a splendid order from them – not so large as some taken in Durban, but very good considering the size of the place. I liked Hobart better than Launceston, but Tasmania is a beautiful spot, mountains, rocks, rivers and almost tropical foliage – fruit simply abounds on every hand. Except grapes and they are brought to Launceston from Sydney such beauties and sold for ‘3 to ‘6 per lb. My friend Mr Mackie has sent me a letter here since his return inviting me to come to his house to spend a few days – he lives some miles in the country and promises to come to the station with a buggy to fetch me but I must move on to Adelaide tomorrow or the next day and have no wish to make my stay here a day longer than is actually necessary for the business – so you think I am a rover do you – well I assure you it will be a happy day for me when the roving ceases and I can sit down a bit quiet with you my beloved Angee to whom my absence has been a trial I know. If you could have had a peep into our cabin on board the "Coogee" last Saturday night you would have seen one side and that not a very pleasant one of my travels. It contained 4 berths and one of the bottom ones, very small, was well filled I assure you with my body. Sleep was all of the question for any of us – about midnight the last of our company was led into the cabin drunk and he appeared to know the young fellow above my bunk and wanted to get him a soda and brandy just to finish up with which he consented to, but before leaving the cabin looked down upon your beloved saying "and shall I get you one old man". To which the old man soon gave an answer easy to be understood. I felt quite indignant at being thus addressed. I was glad afterward that this poor man elected to sleep outside in the saloon and left our little cabin free from the breathings of a drunkard.

I shall send you a cable directly as you so desired to hear and I have been cogitating how I could make it up. If I sent it direct to you I must needs put Mrs Edward Petter Barnstaple so think I will send it to Mary as there is only one Hortop and she will soon send it over to you. I hope dear Arundel has meet with some encouragement in his business in London – hope there may be some letters from him at Adelaide and others sent on here arriving at Durban after my departure – I am certainly moving over vast tracts of ocean and land and this great world will soon become a place no larger than Barum was in Holland Street days. I am very glad I did not bring Lazarus down here it would have been very expensive and I get on very well with my luggage and it is not the trouble to me that it used to be. It is most unusual for me ever to get a cold, but I have had a little one which is passing away nicely – through mercy my health is wonderfully good and the Lord has come in with special mercy in the midst of all the sorrow of this division and through His great goodness I have not wanted a company with whom I could unite in praise and worship and thanksgiving even on board the "Arana" – sometimes small, but two or three become a host with the mighty one in the midst. Give my kind love to dear Arundel & Harry & Emma and all the darling children, Mary & Martha, Eunice & Eliza and all dear friends and with a double portion for yourself believe me once more my dearly beloved wife.