Mail day draws near again and if I do not write you a long letter, it is not because the last few days has not supplied abundant matter for one. On arrival here last Friday evening I had only just time to catch the out-going English mail and you will have heard long before this reaches you of my being in Burma from the Cable to P.F. & Co. It is an interesting place having features both as regards the country – the dwelling and the people, also the attire quite different to India. Rangoon is situated on the banks of the Irawaddy[sic] River  and all the country around is flat with very luxuriant vegetation and except where it has been cleared for habitation, is a dense jungle. The forests of teak wood are immense and it is one of the principal articles exported from the country. The dwellings are mostly built of teak wood and when stained with a dark colour it look exceedingly pretty in the skilful arrangement of the wood for the bungalows.

These, as well as the native huts, are all raised many feet from the ground: this being necessary on account of the rains, which begin in May and continue for six months. The natives keep what they call a "water feast" just before the rains commence and are privileged at that time, to throw water by syringe or otherwise over any person they meet and no-one is offended by it, although sometimes a European may find himself suddenly drenched. The cantonement[sic] is about the most beautiful place I have been – i.e. the residences of Europeans and the wealthy natives and Chinese. Every bungalow having acres of ground around them, planted and laid out in park fashion, and all built upon piles keeping the dwelling flat, about 8 feet from the ground. Then there is a roof of red or brown tile and a nice balcony all around, very tastefully arranged with trelace[sic] work. The Burmese are quite a different race to the Indians and strongly resemble the Chinese in the expressions of their faces and just as fair. The men's bodies are marked very much, giving the idea of having a brown lace garment tight to their skin, it is so skilfully worked into a pattern and must give them great pain when it is done. The women are very clean and dress in all the brightest colours they can get. Their hair, like all natives, is jet black and is rolled up into a crown on the top of their heads – a bright rose is generally stuck into it. A bright coloured silk sarong generally pink is worn around the lower part of the body – then a white short jacket and a bright yellow silk scarf thrown loosely over the shoulders with ends long enough to stream about in the air. The men wear yellow silk turbans, also a white jacket and a coloured sarong, so that the dress of male and female are much alike.[1] Men, women and children all smoke large cherroots and a ludicrous sight it is to see them with these huge things in their mouths. I suppose they are very cheap. They seem a much prouder race than the Indians.

On Saturday the day after my landing I called upon a Christian called Galstein living here and practising as an advocate – he is a well-informed man and acquainted in some measure with the truth, but is rabid on adult baptism and does not distinguish between water baptism and baptism of the Spirit as he calls it. There are about 15 or 20 others with him, mostly Burmese and they are certainly a very interesting company and rejoice in the truth of redemption. There is singular gift among them and since their leaving a "Baptist Church" about 3 years ago, from which they were expelled because [of] holding to the truth of the Lord's return, the few brothers have composed about 150 hymns forming a book and also tunes for each hymn. Their singing is simply grand for power and melody.

I had a good battle over the question of baptism with Mr Galstein on my first call and attended their meeting the same evening in the house of one of the brothers, when it came up again and it was very grieving to see how a work of God in these last days had been marred through the undue prominence given to baptism. On Lord's Day morning before I had left my bedroom Mr Galstein called and we talked over certain points again for an hour or more before breakfast. At 10.30 I went to their worship meeting at a brother's house – the floor was about 2 or 3 times as large as our room at Ilfracombe and the company were all sitting upon it in Eastern fashion – the sisters in their bright and many coloured attires each with a rose in their hair. Their singing was very sweet although having no understanding of their language I could not join them in it. On a brother praying all the company prostrated their bodies – faces to the floor and each sister covering her head entirely with the yellow silk scarf worn around the neck – the brethren remove their yellow silk turbans during the time of the meeting and so particular are they as to this that the omission of it by either would be regarded as almost sufficient ground to be put away. The prayers and worship, so far as I could judge of it – by the spirit of the men was from broken and contrite hearts. In the evening they broke bread at another room. The ground upon which they gathered is not clear to me, nor is it to themselves I think so I took no part of it, or had any fellowship. On Wednesday evening I spent some hours with all the brethren and had some good plain talk with them and my hope is that some if not all may know what it is to be linked with God's present testimony upon this earth. You may judge of my surprise on Lord's Day morning after the meeting was concluded, the brothers and sisters commenced smoking their cigars - only fancy Miss Shapland, Mrs Hardie, Miss Wilkins, Mrs Gant and Mrs Petter and Miss Oates lighting up a cigar in the room and then walking home – yet ludicrous as it may seem that is the custom here and is thought no more of than carrying an umbrella. One European sister present said to me that she wishes they had been converted from smoking 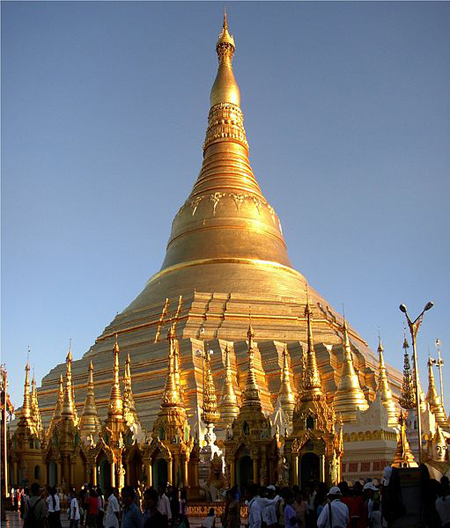 One of the largest Buddhist temples in the East is here – it is called the Pagoda situated on a hill and commands the attention of all visitors to Rangoon and can be seen for miles down the river. The centre of the temple is a massively built dome as high as St. Paul's covered with leaf plates of gold and the top of it studded with precious stones. There is also on the top a beautifully made spiral framework, around which are hung hundreds, perhaps thousands of small bells and the gentlest breeze sets them all to work, producing musical sounds – all around the table land on the summit of the hill where this gorgeous gilt dome is erected are dozens of small temples most elaborately fitted up and each filled with their dead gods, some of which are figures at least 12 feet high and I dare say there are 20 or 30 of these in each of these temples apparently sitting in council. Bells abound in the place, some of enormous size. All the degrees of degradation into which the heathen are sunk – "because that when they knew God, they glorified Him not as God, neither were thankful, but became vain in their imaginations and their foolish hearts was darkened, professing themselves to be wise, they became fools, and exchanged the glory of the incorruptible God into an image made like to corruptible man, and to birds, and four footed beasts, and creeping things." And here they were all displayed shewing how true the Word of God is.

The principal god maker in Rangoon is well known to the brethren here and he has attended some of their meetings and confesses that he does not believe in the gods he makes and if he could sell all his stock he would no longer continue this business. Singularly enough yesterday afternoon a fire broke out in one of the densely populated suburbs and swept away hundreds of inhabitants – about a mile in length and about three quarters of a mile in width – we saw the dense volumes of smoke – the god-maker's gods were among the ruins, so now he will give proof to others as to whether he will continue the wretched trade. We also had a fearful fire in Rangoon about 2.30 yesterday close to the British Burma Hotel where I am staying. I was awoke from a sound sleep by the noise of hundreds of voices of hundreds of natives running by the Hotel and could not think for a few moments what was the matter, but on opening one of the doors looking out from a balcony I saw the flames were very near us. Lazarus was awake at the same time and was sleeping outside my door. The guests at the Hotel were soon astir and taking up a few garments all fled across the road. I soon saw that the wind as it was then blowing gave the building a chance and so Lazarus and I returned and packed up all my clothing and papers and had all the boxes removed – all the other inmates did the same – the samples I did not touch. Well we watched the flames for an hour or more as they swept past the back of our building, but in the mercy of God it was spared and as the day was breaking we took our things back to the Hotel again. On being settled in our room I told Lazarus to shut the door – he knew the rest dear fellow and we knelt down together and thanked God for His great mercy to us. I then lay down and had a little sleep and got to business again at the regular hour. The sight in the night was certainly a most appalling one and not likely to be forgotten. The fire engine service was very ineffective until the troops came upon the scene with their appliances. Soldiers with fixed bayonets and the police with their bright sabres marched about to impress the native mind that law was there and this is highly necessary too, for on such occasions the one thought filling their mind is looting.
Glad to hear Mr Robertshaw was well and hope he may return to his beloved in safety – D.V. I shall not be very long behind him.

Much love to you all once more and believe me my dearly beloved Angee.

[1] A couple wearing similar native costume can be seen on this page.