Arrived here on Thursday morning at 6 and after three days began to feel at home in a place and yet there is not much about it home like. But the bewilderment always connected with a fresh place soon passes away and one gets the measure of the city. Was very thankful to get your dear letter of Dec. 30 – to find that you all had spent a very happy time together and can quite understand from the experience of former years how acceptable the rest would be to you that follows the day. It is delightful to think of the dear children's pleasure in thus being around you – their little cups not only filled, but running over in thus finding themselves surrounded with hearts filled with love toward them. God even our Father be praised for it all – He is the source of every good thing.

On the day of my arrival I met young Mr. Monteath at the office of the British India Steam Ship Co. where he is engaged and got all information as to the meetings here. Mr & Mrs Monteath, his parents are here for a visit from England and Mr M. was having a meeting at a brothers house that night and I managed to get with them just before the close of it. 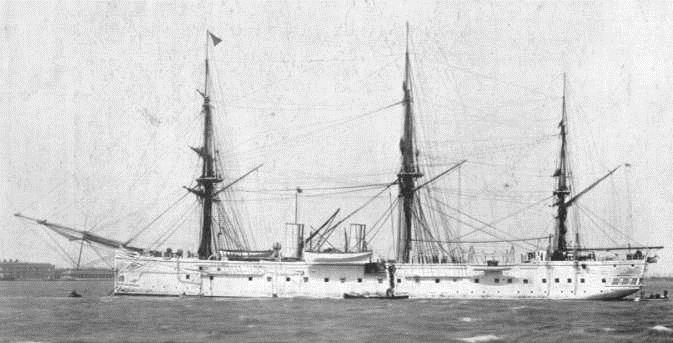 H.M.S Bacchante is in Calcutta and there are 4 on board in fellowship who were present, one of them remembered me at Portsmouth. Mr. M. was having another meeting the next day at another brother's house and kindly invited me to dine and go with them after, which I did. In their love too, they sent carriages to the Hotel for me and I really enjoyed the time spent at their house and afterward at the meeting where Mr. M. preached the gospel with much fervour and sweetness. Tonight we have had the usual prayer meeting so that I have seen nearly all of them. Tomorrow D.V. we break bread at 4.30 pm for the convenience of our sailor brethren and the second meeting for the Gospel will follow at 6.

It is very much warmer here than the part I have come from, but the climate is very fine. Calcutta cannot boast of such large buildings as Bombay, but it is a large place and has its own distinctive character – the Bengalese being different in many respects to some of the Indian races. 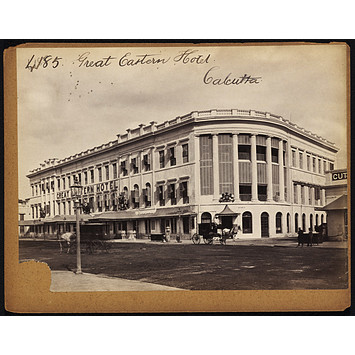 The  hotel I am staying at, The Great Eastern, is by far the best in India and I have a very comfortable room, one side of which is dressed with a grand display of P.F.&co's. novelties, of which they have sent me a special shipment for distribution in the place. Lazarus and I have been plodding away with the preliminary calls, since we fixed up our show and one merchant has been in this afternoon and one in the morning who have each given an order so we take courage and thank God. My servant continues to be a real comfort to me. At Lucknow George Petter, my cousin, went into the Bazaar with me and one Hindu merchant who could not speak English, Lazarus talked to him in his own language. George was much struck with the ability he displayed and advised me to keep him. George, of course, understood Hindustani.

We had a nice day yesterday which is always a cheer to the spirit, soul and body. The work begins again and through mercy I have had some encouragement – it really needs all my wit to battle with the prejudice and one having no experience in the trade would be beaten at the very outset. We have had some rain here today which is a change, as every day here the sky is bright and without a cloud and the people do not talk about the weather as it is always the same. Some parts of Calcutta are very dirty – the most primitive dwellings I have seen in India. The walls of the houses in the poor parts are made of bamboo walls and look very dirty hovels – even the best part of the place is a long way behind Bombay. There are some fine parks which I have not yet seen.

Was disappointed at not hearing from Harry by the last mail - I should have been glad to hear about the business how he is getting on with it, I hope satisfactorily. Also, Arundel mentioned that Harry had said the returns had dropped a little. I hope he will stick to it as nothing can succeed in this age of competition without that quality. Had a letter from George Petter's son this morning, which I enclose. Also some photos as I dare say the Petter family in Barnstaple will be interested to see them. G.B.P's wife is a very nice person, they are expecting to visit England next year and I have told them that we shall be very glad to see them at Ilfracombe.

Shall be very glad when the time comes to set my face toward Plymouth once more – have been feeling a great desire to see you all for the last day or two, but suppose I must wait a little longer yet. Through mercy my health keeps wonderfully good – the time in the cold latitudes of the northern parts has braced me up, but we shall soon be in the hot weather again now. The Lord graciously continues to preserve us all not only in health of body but in soul too. So that He may ever find thanksgiving and joy welling up in our hearts toward Himself.

Once more with much love to you my dearly beloved wife, our dear children and grandchildren and all dear friends – Emmie and Eliza and believe me.